From the US? Considering an abortion? Go to http://abortionsafety.com/index.php, a database of abortion malpractice information in the USA.

"When we consider that women are treated as property, it is degrading to women that we should treat our children as property to be disposed of as we see fit." Elizabeth Cady Stanton
Disclaimer: http://prolife-girl.blogspot.ca/2012/07/a-disclaimer.html 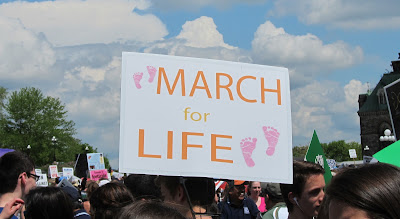 This was my first ever March for Life! To say I was nervous would be an extreme understatement. As May 9th approached I found I could think about little else. I was incredibly excited to finally have an opportunity to attend the March - it is something I have wanted to do for years! But I was also terrified. Would it live up to my expectations? What would the reactions of the people living in Ottawa be? Would the pro-choice protesters be angry? Could I be rational and compassionate in the face of any opposition? Did I have it in me to be a good pro-life ambassador or would I push more people away from the pro-life side? What would my family and friends say about my attendance? 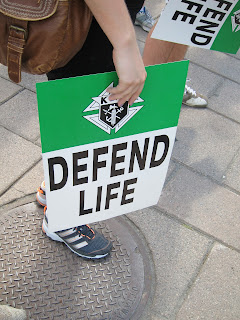 The day itself started out beautifully. Despite calls for rain and thunderstorms, the morning was bright, sunny, and incredibly hot. I know it sounds cheesy to say, but it really did feel like God was watching over our March.

I spent quite awhile trying to decide what to wear. I have never been to the March before (in fact, I have never been to any rally or protest before) so I wasn't sure what to expect. Since March for Life presumably involves a lot of walking, I opted for my brand new (and super colourful!) running shoes, work out clothes, sunscreen, and a rain jacket just in case.

Walking to Parliament Hill was a surreal experience. I have spent so much time reading pro-life news, blogs, and websites but I have never encountered people, pro-life or pro-choice, who care about this cause. And suddenly, I was in a place where everyone there had something to say about abortion. And there were SO many of us! Literal rivers of pro-lifers were streaming towards Parliament. Some of them I recognized from the news, so I was very starstruck. I actually got to talk to one of the students who was arrested in Carleton a couple of years ago, and I think I almost fainted from excitement! Of course, there were also some pro-choicers, nearly all of them women about my age, and all of them with homemade signs and hipster clothes. They clearly weren't happy with us, so we just waved and smiled at them.

Parliament Hill was incredible. There were so many people, and such a diverse crowd. And so many signs, in French and English and, occasionally, other languages. Old people, priests and nuns (it was wonderful to see religious people taking a stand, as they should!), children, teenagers, students, families, so many women, and lots of babies! There were even rumours that Pro-Life Humanists attended, and I was very disappointed that I did not get an opportunity to see them. 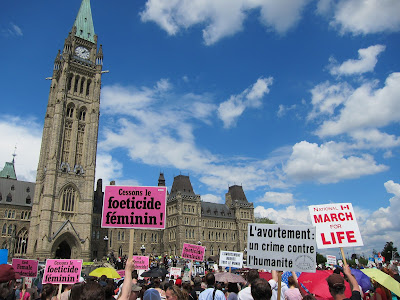 But by far, the babies were my favourite; there is something about a baby that just gives such a wonderful testimony against the pro-choice cause. How can you argue for abortion, when the very people who die in abortions are sleeping right in front of you?

It was also wonderful to see the pro-lifers' reactions to these children. There were quite a few young, unmarried mothers there, and everyone was so filled with joy to see these families! These reactions fly in the face of the stereotype that pro-lifers are stuffy religious people who hate women who become pregnant out of wedlock.

As the pre-March rally progressed, more and more people streamed into Parliament Hill, until it became difficult to walk anywhere for fear of stepping on someone. The sky was clear, the heat was terrible, but there were few complaints. The densest area was near the stage, where MPs were giving short speeches in favour of the pro-life cause. I know that there are few MPs who are openly pro-life, so I was surprised how long the talks lasted! Clearly, there are more of them than I ever thought. By far the biggest cheer was for Mark Warawa (he's amazing, by the way), who proposed Motion 408 against sex selection abortion, which just happened to be the theme of this year's March. 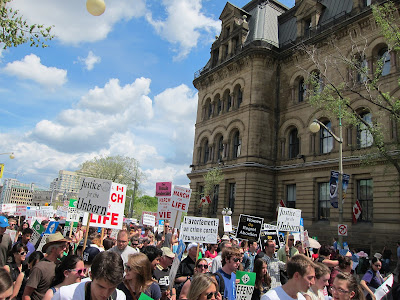 And finally, the March began. It took forever to funnel out of Parliament Hill. Everyone was so full of joy, spontaneous cheering broke out throughout the walk, and there was even a saxophone serenading us. I expected to see pro-choice protestors right away, but they were nowhere to be seen. I was starting to wonder if they had gone home, when we finally hit a stretch of sidewalk where they had decided to gather. 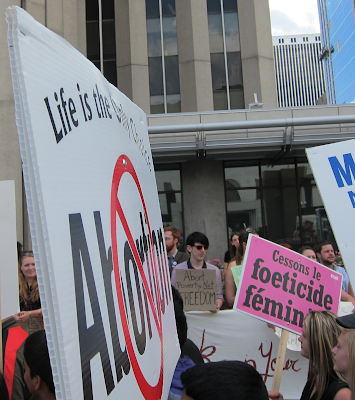 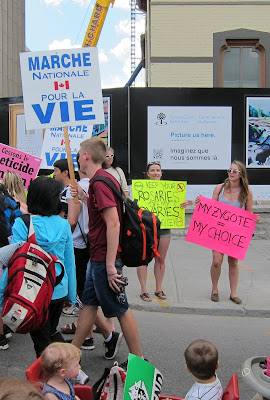 There were way less of them than I expected. My favourite moment of the March was when I overheard a conversation between a pro-choicer and a group of pro-life highschool students.

Pro-choicer: "I know you're only here because you get a day off school."
Pro-lifer: "Actually, we really believe in this cause."
Pro-choicer: "..." [the look on her face was priceless. A mixture of I-don't-know-how-to-process-this shock and disgust]

My least-favourite counter-protester was a middle-aged man who held a sign which said: "Pro-choice dad, protect my daughters' right to choice".

Another interesting thing I noticed was that no one who was watching the protest or the counter protest joined in any significant way. I was especially surprised to see people avoiding the pro-choicers. There were many pro-choice protesters who seemed to spend the March standing by themselves, holding a sign and never saying anything. It seemed very lonely, especially in contrast to the pro-life March, which filled the streets!

My favourite pro-life protesters were the Pro-Life Avengers. I especially loved Thor, who had "Pro-Life" written on the front of his hammer. These guys were a huge hit with everyone at the rally. I have yet to see them in the news though, even in the pro-life news! :( 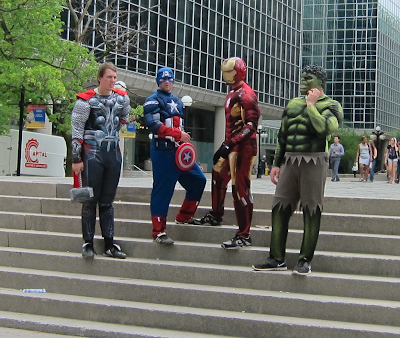 The reactions of the Ottawa citizens were mixed. Construction workers stopped their work to stare, and a few of them cheered (yay!). Many people just looked at us with bewilderment. They clearly could not understand why we were here, or why there were so many of us. A few were angry. Some yelling. A few fingers were flipped. There were lines of cars stretching as far as you could see, held up by the March. The traffic must have been horrible.

People had no choice but to notice us!

There were some press. Not a large press presense, and even though I expected this it still boggles my mind. What other rally - a rally that involves the attendance of tens of thousands of people - would create such a small wave in the media? But I was told the coverage was better this year (yay again!) and I did see some interviews between pro-lifers and reporters. EWTN was also there to broadcast the March live. It's times like these that I am just SO PROUD to be Catholic!

Near the end of the March, I was told we were going to walk by an abortion clinic. It wasn't clear to me where this clinic was - I never saw it - but the moment we walked by was very obvious. Suddenly, people stopped smiling. There were no cheers. There was a kind of chill over the crowd. If people were talking at all, they were talking very quietly. 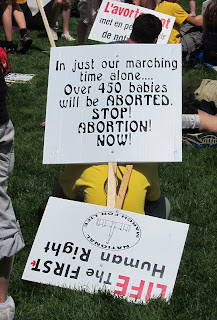 That was also around the time we walked by the large abortion posters - the ones which show babies who have lost their lives in the procedure. They were very hard to see. Suddenly you're reminded why you are there, and all the joy at seeing so many people marching for life leaves you, and you just wish that this didn't have to happen at all, that all lives could be protected.

Then we were back at Parliament Hill. People were returning their signs to the March organizers. Many were leaving - all of the students had to return to school. The pro-choicers cleared out almost immediately, which surprised me as I expected them to hang around until the very end.

Once I reached the Hill I think it was obvious why they had left. After the March, post-abortive women and men share their testimonies, and it is very difficult to listen to the pain in their voices. It was a very fitting way to end the March, but I would like to see at least one abortion testimony spoken loudly before the March next year, so that everyone can hear it, especially the pro-choice protesters.

Then a mass started, and we left to return home. And my first ever March for Life was over. 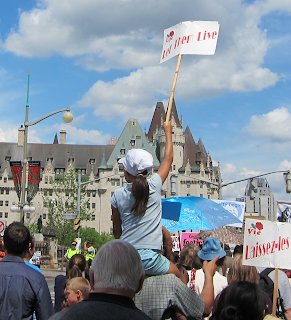 2. How peaceful and family-friendly the event was. How many other rallies like this (if there are even other rallies that can draw this kind of attendance), involve almost no danger of violence, no vandalism, no littering, and no anger. It was amazing to see how respectful the pro-lifers were, both of the city itself and of the people in it. The police definitely had an easy job yesterday.

3. The joy that permeated the March. The cheering. The smiles.

4. The reactions of the average citizen. So confused. So bewildered. Hopefully a few are inspired to read about our cause!

1. The focus on Christianity. How many atheist or agnostic pro-lifers didn't attend, or left early, because they didn't feel welcome? That isn't to say that there shouldn't be a religious presence - there absolutely SHOULD - but I don't think there should have been a mass after the March, on Parliament Hill. The masses should occur in the churches, and be specifically for the Christian pro-lifers. If we want other people to attend the March, we shouldn't force church on them! There was also too many speakers who said they were against abortion because God is. This does not help our cause. It just makes us sound like crazy religious people.

2. The Theme. I agree that sex selection abortion is wrong, but it isn't the ONLY thing that is wrong about abortion. Aborting anyone, boy or girl, is wrong, and I think this theme overshadowed that very important fact. 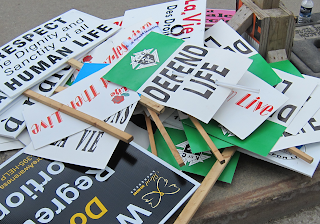 3. The lack of homemade signs. Homemade signs show you care about the cause, they show that you are willing to put time into spreading your beliefs! I hope more people are inspired to make their own signs next year.

4. The fact that so many people left right away. It gives the impression that you really don't care that much about the pro-life cause. Though there was still a very sizable crowd several hours after the March (much larger, I am sure, than any other crowd that comes to Parliament), if the attendance could have stayed as high as it had been during the March, that would have made a wonderful witness!

5. The amount of Christians. That in itself is a VERY good thing (this is exactly the sort of protest that Christians should be involved in!), but I would like to see a more diverse set of beliefs expressed in the March. There should be more groups like Pro-Life Humanists and Secular Pro-Life, and they need to have a strong presence! 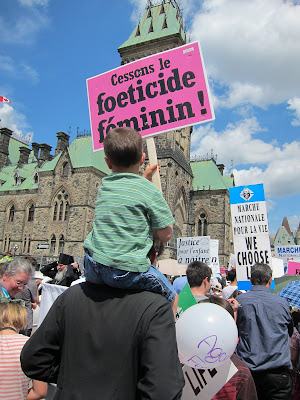 Email ThisBlogThis!Share to TwitterShare to FacebookShare to Pinterest
Labels: march for life

Most Popular Posts This Week

Most Popular Posts of All Time